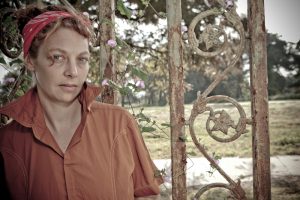 The Aurora Nealand Sextet will bring the music of New Orleans to Dublin, NH on Friday, July 1 at 7:00 PM for a concert on the lawn at the Fountain Arts Building on the campus of the Dublin School. The sextet is:

An established bandleader, composer, performer and improviser, Aurora Nealand has become a prominent force in the New Orleans music scene since she first arrived in 2004. Combining the “formal education” – a music composition degree from Oberlin Conservatory and training at the Jacques Lecoq School of Physical Theatre in Paris – with the “informal” experience of playing music in the streets and clubs of New Orleans and throughout the northern Hemisphere, Nealand has emerged as an innovative, sensitive and daring music creator and performer.

She is most recognized for her performance on saxophones, clarinet and vocals and has been at the forefront of the revival of New Orleans Traditional Jazz amongst the younger generation of the city’s musicians. After playing and learning as a sideman in established New Orleans Bands for several years, (Panorama Jazz Band, VaVaVoom, The New Orleans Moonshiners), in 2010 she formed her own Traditional Jazz band “The Royal Roses”. The Royal Roses released it’s first album, “A Tribute to Sydney Bechet: Live at Preservation Hall” to national acclaim and Nealand was voted as one of Downbeat Magazines top ten rising stars for soprano saxophone in 2010.

Nealand grew up in a musical family in California listening to Preservation Hall Jazz Band recordings side by side with Stravinsky, Joan Baez and the Pixies. Later, during her time at Oberlin College/Conservatory she was exposed and fell in love with the recordings of Mingus, the soundscapes of Mort Subotnik and the performances of Laurie Anderson. With a strong interest in interdisciplinary work and sound for theatre and installation, she moved to Paris to study at the Ecole du Theatre Physical Jacques Lecoq. Upon returning to the states, she bicycled cross-country collecting audio interviews and stories in rural America to be used in a series of compositions about true “American Dreams”. This bicycle trip landed her in New Orleans, which has acted as her home base since 2005. In New Orleans she began playing traditional jazz, jazz manouche of Django Reinhardt, as well as Balkan/Klezmer music. She quickly became involved in the local improvisation scene as well, making frequent appearances at the Open Ears series playing her own compositions with various ensembles and artists.

In addition to leading the Royal Roses, Nealand is also the leader/frontman ofNew Orleans premier rockabilly band “Rory Danger and the Danger Dangers”, and as performs frequently with her solo project, “The Monocle”. She also is a member of Panorama Jazz Band and Why Are We Building Such A Big Ship. In 2010 and 2011 she appeared frequently as herself in the HBO TV series, “Treme”.

Nealand has performed extensively in New Orleans at clubs, in the Jazz and Heritage Fest, FrenchQuarter Fest and Satchmo Fest. She has also performed frequently in New York City at Lincoln Center Summer Festival in NYC, the BlueNote, Knitting Factory, Barbes and has premiered original works at Symphony Space and Alice Tully Hall. Internationally she has appeared at the Istanbul Jazz Festival, London Swing Festival, Barcelona Swing Out, and has toured several times around Irealand, Sweden, Germany , France and the Balkans.

This concert is presented by the Walden School as part of their summer concert series and is FREE and open to the public.