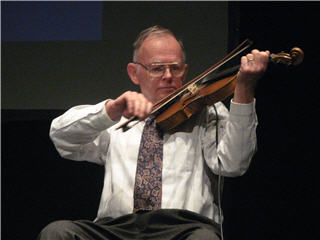 Cape Breton-style fiddler and local legend Harvey Tolman will perform an evening of Cape Breton melodies on November 5, 2022, at 8 P.M. at the new Dublin Arts venue at 1459 Main St., Dublin NH (Route 101). Harvey has been playing the Scottish Airs, Strathspeys, Reels, and jigs of Cape Breton, Nova Scotia for the last 60 years. In 1999, he was invited to be part of the group representing New Hampshire in the Smithsonian’s Folklife Festival in Washington, DC. He also received the NH Governors Arts Folk Heritage award in 1980. Until Covid struck, Harvey played at a Contra Dance every week since 1980, first in Harrisville and then in his hometown of Nelson. Cape Breton-style pianist Lloyd Carr will accompany Harvey, and Frankie Brackley Tolman will give a brief background on the origins of this exciting form of music. A $20 donation at the door is requested.

Dublin Arts is a sparkling new full-spectrum art center created out of an old factory space, offering performances (musical and theatrical) and classes (art, writing, and music), as well as, a space for conferences, group meetings, and events. And MUSE, a gallery for shows highlighting regional artists.

Dublin Arts is handling tickets the way Harvey wants with cash at the door. If you want to reserve a seat, email Molly McDowell at mvmcd@aol.com with your name and phone number and how many tickets you need and she will put you on the list and will hold your tickets until 7:45 PM. All unpaid tickets will be released at 7:45 PM.