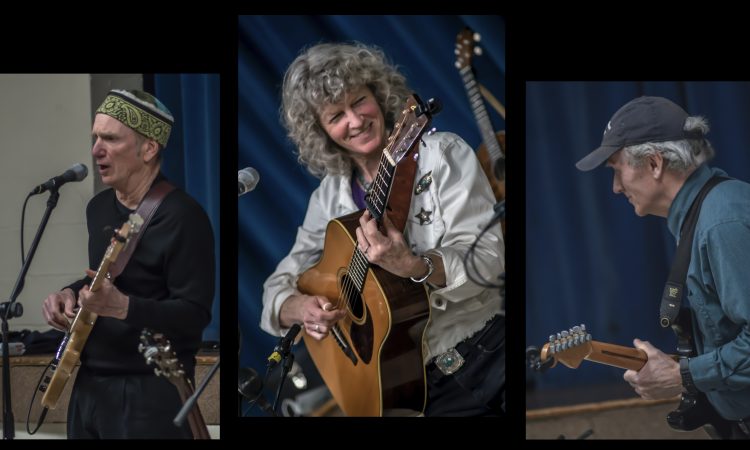 Cosy Sheridan will appear in concert at The Nelson Town Hall on Sunday, November 13 at 3 pm.  She will be accompanied on bass and keyboards by Charlie Koch and Kent Allyn.  Special guest appearance by Julie Snow!

This will be MFS’ first indoor concert since early 2020. There is NO ADMISSION FEE, but we will have a basket out for donations to cover our presentation costs. We are still in the midst of a pandemic and require that masks be worn indoors and there will be no refreshments served. Help us return to the world of music presentation while keeping everyone safe. Please review our COVID protocols.

Cosy Sheridan first appeared on the national folk scene in 1992 when she won the songwriting contests at The Kerrville Folk Festival and  The Telluride Bluegrass Festival.  The Boston Globe wrote: ”she is now being called one of the best new singer/songwriters”. She plays a percussive bluesy guitar  – often in open tunings and occasionally with 2 or more capos on the guitar. She is backed up with the strong rhythms and harmonies of bass player Charlie Koch and keyboardist Kent Allyn.

Cosy continues to be one of the most prolific songwriters in the folk scene. My Fence & My Neighbor was number four on the folk radio charts in 2018. Pretty Bird was listed in Sing Out Magazine’s Great CDs of 2014.

She learned guitar when she was nine years old from her babysitter – using an old guitar she found under the family piano. She was a voice student at The Berklee College of Music, and a guitar student of legendary fingerstyle players Eric Schoenberg and Guy Van Duser.  She has played at Carnegie Hall, The Cowgirl Hall of Fame, and on the Jerry Lewis Telethon.

She teaches classes in songwriting, performance, and guitar at workshops and adult music camps across the country. She is the director of Moab Folk Camp in Moab, Utah.

“Her user-friendly musical philosophy sets her happily apart from the myopic, self-involved songwriters… she is a wonderfully lively, very funny and enormously amiable entertainer with a keen and wicked eye for the excesses of our fast-food, tv-happy  and noisome culture.” – The Boston Globe

“A Buddhist monk in a 12-step program trapped in the body of a singer/songwriter.” – The Albuquerque Journal