Five fiddlers, 2 guitarists, an accordionist, and a flute player gathered at J.D. McCliment’s Pub in Putney, Vermont, on a cool September evening recently. In addition to all of us being resident in the Connecticut River valley, we shared a love of Irish traditional music. We were attending the weekly Wednesday night Irish session to play jigs and reels, reacquaint as friends, meet new musicians, and share stories.

Leading our group this night were Lissa Schneckenburger on fiddle and Corey DiMario on tenor guitar. Lissa set the tone with a choice selection of tunes played at a relaxed pace. Irish reels can be very exciting when played at break-neck or dance-tempo speed, but the lovely soul of a tune is best revealed at more moderate tempos when the lift of a phrase and the ornamentation of melody can easily be heard. A pleasure for listener and player alike. Corey’s chording on the 4-string guitar followed the melody very closely, a hallmark of good Irish accompaniment, and each tune was given its due with numerous repetitions.

McCliment’s Pub – with exposed posts and beams, a wood stove, oak tables and candlelight – provides a warm atmosphere for the session. Formerly a residence, the building has housed a restaurant for thirty years. Owner Jim McCliment established his pub in 2004 and offers mostly American fare with sandwiches and entrees. A particular favorite with regulars is the Fish and Chips dinner. Guinness is on tap as well as local beers. When asked about the live Irish music, McCliment said that he had gotten inspired by his travels in Scotland and Ireland. “Strolling into a pub, hearing fiddles and live music, that was quite an experience and I wanted the same thing for my pub.”

Roger Kahle, a guitar player from Saxton’s River, Vermont, approached Jim McCliment two years ago. Roger found there was no regular hangout for local musicians and he was looking for a suitable venue to start up a session. Jim remembers Roger saying “I can make it happen, I’ve got connections to lots of musicians.” Roger, Lissa, Corey, and fiddler Ethan Hazzard-Watkins were the founders of the Putney session, located in a musician-rich area. They take turns hosting the weekly session which happens year-round.

Besides Lissa, Corey, and Roger, others in attendance that night were Jake Grieco of Saxton’s River who was 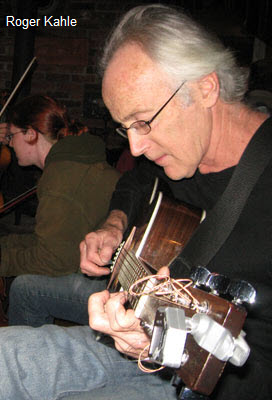 playing a newly-acquired wooden flute; Brattleboro fiddlers Josh Engle, Louisa Pugh, and Amber Nuite with Louisa and Amber sharing a fiddle between them; Mary Cay Brass playing accordion and occasionally piano; and myself on fiddle. For those in the Monadnock region looking for a relaxed setting to play or listen to Irish music with some of the top area musicians, look no further than Putney and J.D. McCliment’s Pub.

(Tunes listed in italics were some of those played at the session.)

Randy Miller is a fiddler, pianist, music teacher, and tunebook publisher active in contra dancing since the 1970s. His contradance band, Celticladda, was formed in 2006 and performs nationwide. Randy’s website is www.fiddlecasebooks.com

The American Folklife Center has published an article about the discovery of wax cylinder recordings made by Francis O’Neill in the early part of the last century. O’Neill, who was the Chief of Police in Chicago, had been born in Ireland and, not surprisingly, was brought up in a musical family. His avocation was collecting Irish music, and in 1903 he published O’Neill’s music of Ireland, a mainstay for folks wanting to learn the repertoire. There was some awareness that he had made the recordings, but they were only recently disovered. Read more about this in the American Folklife News.