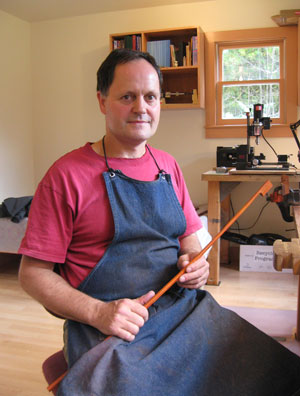 Many know him as a Cape Breton-style fiddler who plays regularly at the Monday night contra dance in Nelson, as well as many other dance halls throughout the region. It’s not hard to notice, between tunes, his friendly manner and engaging laughter. But less well-known is that Roger Treat is a master violin, viola, and cello bow maker, trained by Lynn Hannings and George Rubino at UNH, and Rodney Mohr and Jerry Pasewicz at Oberlin College.

On a sunny September day recently I met with Roger in his new workshop, which he built himself. He also makes many of his own bow-making tools. Roger was a carpenter and builder of houses and barns. “I like to create with my hands,” he says. Then he discovered bow making, which “gave me a chance to make something not only beautiful but functional–a bow that plays beautifully.” A Roger Treat bow is truly beautiful: a highly-polished round stick with rich color, delicate yet sturdy turnings in silver and ebony, gracefully hand-carved tip and frog ends, and a wide ribbon of top-grade horsehair which Roger embeds himself.

Roger’s bows are used, in traditional music circles, by fiddlers Bob Childs, Jane Orzechowski and her children, Mary Lea, and Buddy MacMaster of Cape Breton to name a few. I have had the privilege of using one of Roger’s violin bows during the past few months and can attest to the responsiveness, comfort to the hand, strength, suppleness, and character of this bow both in practice and performance. A 3-hour set of tunes at a contra dance in particular places great demands on a bow and is a good test of a bow’s playability; I have found Roger’s hand-made bow superbly up to the challenge.

Roger uses pernambuco wood for the stick, a dense, heavy Brazilian wood, aged at least 3 years. Historically the best wood for bows, pernambuco retains the strength needed in a bow’s slim dimension, a property lacking in other hardwoods. 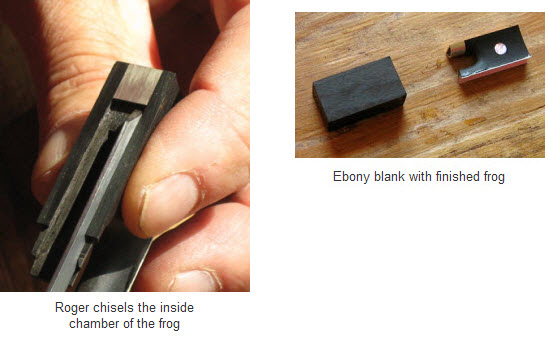 The first step is to make the frog, a separate piece joined to the stick near its end. Roger uses a block of ebony, shapes the sides with a home-made curved chisel, makes the ferrule out of a flat strip of silver, and adds a decorative pearl dot. He makes his own knives from steel files and old straight-edged razors. For the button at the end of the bow, used to tighten the hair, Roger fashions a dowel fixed into a small lathe, then adds two silver rings which add crucial weight to the stick. The completed button’s round shape is then filed into an octagon using a hand file.

Next, Roger makes the stick. It starts out roughly 1/2” square with extra wood left at the tip end. Roger hand-planes the 4 sides, carves the tip end, and completes the shaping of the stick from 4 to 8 sides, and finally (except for the frog end) into a round tapered stick. The stick is given its curve or camber by heating sections over an alcohol-lamp flame and carefully bending the hot wood. Roger uses a template to bring the bending process into a pre-determined curve. He “lets the wood do what it wants to do” during the bending process, allowing for any natural twist. He then planes the frog end so that it aligns properly with the tip end. He constantly weighs the stick as he works, aiming for a finished bow weight of 60 grams (violin). “I try to make the best bow out of that particular piece of wood. My bows have a balance point of about 9.5 inches when measured from the finger balancing the bow to the end of the wood stick.” Roger keeps in mind three things when making a bow: weight, balance point, and strength with flexibility. “A bow might be strong but heavy, so you have to get the weight down without losing strength. It’s a constant battle between weight and strength.”

For the tip plate, Roger uses ancient white mastodon tusk, and hairs the bow with stallion horsehair from Mongolia. Two or 3 coats of French polish (blended by hand from orange shellac flakes and denatured alcohol), silver wire for the winding, and a leather grip complete the bow.

Roger Treat has made more than a hundred bows for use by classical, jazz, and traditional musicians. They are sold in selected music shops around the country, including Stamell’s Stringed Instruments in Amherst, Massachusetts. Or, at the next Nelson dance, you can ask to see Roger’s handiwork. He’s sure to give you a smile and let you try the bow.

Randy Miller is a fiddler, pianist, music teacher, and tunebook publisher active in contra dancing since the 1970s. His contradance band, Celticladda, was formed in 2006 and performs nationwide. Randy’s website is www.fiddlecasebooks.com.