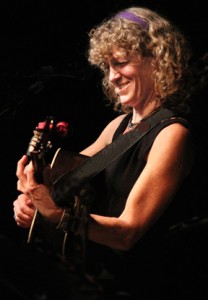 Cosy Sheridan returns to New Hampshire and the Nelson Town Hall for a concert on Saturday, November 16 at 8:00 PM. Admission is $15/$12(Sr/Jr)

Cosy Sheridan has been called “one of the era’s finest and most thoughtful singer/songwriters”  She first appeared on the national folk scene in 1992 when she won the songwriting contests at The Kerrville Folk Festival and The Telluride Bluegrass Festival. Since then she has released 10 cds, written a one-woman-show and her music has appeared in books and film. She has taught songwriting, guitar and performance workshops at music camps for the past 15 years, including The Puget Sound Guitar Workshop and The Swannanoa Gathering. She is the director of  The Moab Folk Camp in Moab, Utah.