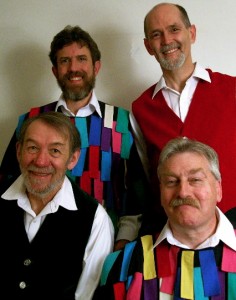 Nowell Sing We Clear with its unusual songs, carols, stories, and customs has toured every year since 1975. Drawn mostly from English-language folk traditions, the songs tell both a version of the events and characters involved in the Christmas story and detail the customs which make up the twelve magical days following the return of the light at the winter solstice. Many of these ancient customs are the basis of the today’s holiday traditions, such as visiting and feasting, gift-giving, carol singing from door-to-door and the adorning of houses and churches with garlands of evergreen.

While much of the singing is done in unaccompanied style, the pageant is also stamped with the energetic dance band sound of fiddle, button accordion, electric piano, drums, and concertina.  The audience will be supplied with song sheets and encouraged to sing along, though after three decades of touring in New England, a whole generation of young people have grown up with these songs and carols and sing along with as much as they can. Some “new”, that is “different”, songs and carols are introduced every year.  Performers are John Roberts and Tony Barrand, widely known for their lively presentations of English folk songs, and Fred Breunig and Andy Davis, well known in New England as dance callers and musicians.

Nowell Sing We Clear has become a regular part of some communities on the Eastern seaboard.This year the ensemble will be playing as far south as West Chester, PA, and as far north as Brattleboro, VT.   The group has several recordings of songs from the show which have been popular items in many households at this time of year. Their CDs are drawn from songs learned for their concerts: The newest is Nowell, Nowell, Nowell. Others are Just Say Nowell, Hail Smiling Morn (which has a cover designed by famous Vermont artist, Mary Azarian), Nowell SingWe Four,  and Nowell, Nowell, Nowell. The first three LP recordings are all well represented on a compact disk, The Best of Nowell: 1976 – 1985 All recordings are available from Golden Hind Records.