Perley Swett, known as “the Hermit of Taylor Pond,” was born in 1888, in an old farmhouse located in 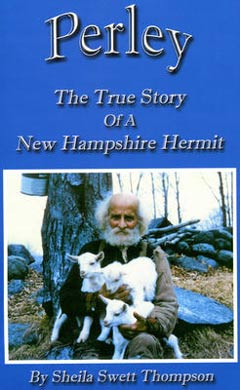 Stoddard, near both the Sullivan and Munsonville town lines. He spent his childhood learning to work hard, with little time for frivolity. When he came of age, he bought his own place a couple of miles away in Sullivan. He soon married and had several children, and achieved what might be considered rural prosperity (lots of land, and an adequate cash flow) before events unfolded that resulted in three years of imprisonment at the County Farm in Westmoreland. After his release he eventually returned to the original homestead. Alienated from family and friends, he began a more reclusive existence, taking comfort in his herd of goats (which numbered over 100 at one point). Eventually he became a local, and then a national legend – his “simple” life style (most of us can at least now imagine living without electricity) and his astute and candid observations about life conveying wisdom which, unknown to many, had come at a very high cost. Except for one day trip to Boston, he never left the Monadnock region, and seldom left his little tri-town corner. When he died in 1973, his life had intersected and influenced a remarkable number of people in ways that could never have been imagined.

His story is told in a book recently published by the Cheshire County Historical Society. Perley: The True Story of a New Hampshire Hermit, was written by his granddaughter, Sheila Swett Thompson. The tale is rendered lovingly, but with considerable candor and objectivity. Thompson is a good writer – at times I felt like I was reading a novel.

The story is enriched with a foundation of historical tidbits as well, which convey how life was like in “the old days.” For instance, we learn that shoes were so precious, many children went barefoot most of the time to save wearing them out. To encourage school attendance, the Town of Stoddard provided a stipend of $5 per child expressly for the purpose of buying shoe leather, so that children could walk to school.

Folks who are interested in local history will find this to be a wonderfully informative story. But Thompson’s success at exploring the emotional and psychological qualities of her characters, and the time in which they lived, transcends just regional interest.

The New Year of 2009 finds the world cautiously hopeful. In our little corner, we are grateful to have survived the recent ice storm, with several days of power outage for most people, relatively intact. There were many silver linings, and one of them was the awareness of what strong communities we have. Communities are both geographical, and cultural, generally with some overlap. Over the last year it has been very interesting to see the large numbers of young (high-school aged) people coming enthusiastically to contra dances – providing some indication that this social/musical tradition will remain vibrant. MFS is proud to continue sponsor dancing in Nelson every Monday, as well as on the second Saturday of every month, and in Peterborough on the first Saturday. The MFS concert season starts off with a Mardi Gras celebration with the Folk Soul band on February 28th. We are looking forward to a concert with Bob Franke in April, and there are several other concerts in various stages of planning at this time.

As always, your comments and suggestions are most welcome.  Please write us a note. We look forward to seeing you throughout the coming year.