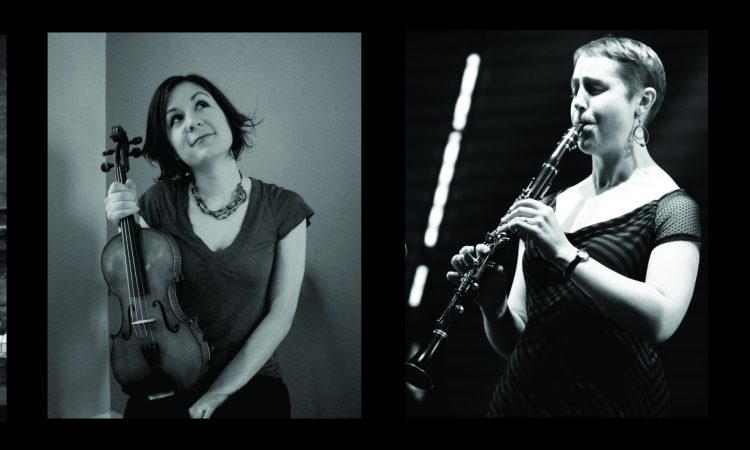 Julie Vallimont celebrates the release of her new album Dark Sky, Bright Stars with a Sunday afternoon concert at the Nelson Town Hall on Sunday, February 3. Concert time is 3:00 PM.  Admission is $15/$12(Sr/Jr).

Julie’s tunes are imbued with the feeling of dance music from the Celtic, Québecois, and French traditions that make up the New England fiddle repertoire, that sense of lift and movement and space. But they’re also different: they’re conceptual, like vignettes, as Julie draws on the emotional source of 8 years battling illness, as well as from her joyful experiences in the music community. Julie arranged her tunes in ways that would showcase the unique timbre and style of each instrument and player as they interacted with her nimble, expressive piano and accordion. The result is a delightfully varied and human collection of sounds.

In addition to her papercut artwork (Julie herself created the album cover), Julie also makes “crankies”: scrolls of paper that are illustrated and hand-cranked on spools to create moving pictures used in music and storytelling. These add a magical visual counterpart to the concert.

Julie Vallimont is known for her rich, nuanced, versatile piano style, skill in playing for dancers, and music with heart. Based in Boston, she plays internationally with fiddler Noah VanNorstrand in the renowned duo Buddy System, and is an in-demand pianist and accordionist in New England and nationwide. Her compelling, rhythmic piano style draws on her study of New England contra piano and traditional Québecois, French, Celtic, and Appalachian music.

Anna Patton of Brattleboro VT is a versatile clarinetist, singer, composer, and educator. She is a member of the internationally touring dance band Elixir which combines fiddle tunes with horn arrangements influenced by early jazz, R&B, and classical music. She also performs with the cello-oud-percussion-clarinet quartet the Dunham Shoe Factory.

Fiddler and singer Lissa Schneckenburger is a master of the moods of New England’s traditional music: a winsome, sweet-voiced singer who brings new life to old ballads and a skillful, dynamic fiddler who captures the driving rhythm and joy of dance tunes old and new. Raised in a small town in Maine and now living in Vermont, Lissa grew up with music. By the time she was in high school Lissa was playing concerts on her own, specializing in the sprightly New England dance tunes that combine influences from the British Isles and Quebec with homegrown twists that have been evolving since Colonial days.

McKinley James is a cellist studying at New England Conservatory. After years with the Vermont Youth Orchestra, she joined the Boston Youth Symphony, and then the premier youth orchestra led by Ben Zander, the Boston Philharmonic Youth Orchestra. With the BPYO, she toured Europe twice, playing in concert halls such as the Berlin Philharmonie and at the Alhambra in Spain. She has also played with the Portsmouth Symphony Orchestra, Middlebury College Orchestra, the New England Conservatory Symphony, and was a soloist with the Champlain Philharmonic Orchestra.