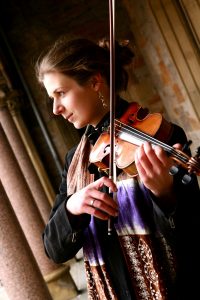 Join us on Friday, May 3 for a 7:30 PM concert with the Mari Black Trio playing two sets of music featuring fiddling from around the world. Mari will be joined by Conor Hearn on guitar and Jesse Williams on bass. Admission is $15/$12(Sr/Jr).

Called “One of the brightest fiddlers around today” by WGBH radio A Celtic Sojourn’s host Brian O’Donovan, multistyle violinist and champion fiddler MARI BLACK has been delighting audiences across the country and around the world with her energetic playing, sparkling stage presence, and dazzlingly virtuosic fiddling. Raised on a rich blend of traditional musical styles, Mari made her entrance onto the international stage when she became Scotland’s Glenfiddich Fiddle Champion, 2-time U.S. National Scottish Fiddle Champion, and 2-time Canadian Maritime Fiddle champion, all within a three-year period. Ever since then, she has been spreading her love for dance-based music, performing as a featured artist at Celtic festivals, Scottish Highland Games, celebrated folk venues, world music concert series, and acclaimed classical concert venues including Carnegie Hall. Mari’s passion for traditional music extends far beyond the concert stage, as reflected in her work as a teacher, performance coach, dancer, competition judge, and musical ambassador dedicated to connecting people through music. Known as a master teacher with a playful and unconventional approach to helping students expand their horizons, Mari has taught workshops at the Acadia Trad School, the Jink & Diddle School of Scottish Fiddling, the Mark O’Connor fiddle camp, the Tanglewood Festival, the Yale School of Music, and more. Currently touring nationally with her trio, Mari’s favorite thing to do is sweep her audience away on a spirited musical adventure featuring dance music from around the globe: Celtic, American, and Canadian fiddling, jazz, tango, klezmer, folk, original works, and more!