When I first heard Flynn Cohen (several years ago) he was playing backup guitar behind three stellar fiddlers who were wowing the audience with an array of fancy stuff.  It wasn’t until late in the concert when Flynn did a solo set that his ability to similarly dazzle was displayed.  Since that time I’ve come to admire his playing for his willingness to understate. Or perhaps another way of saying that is that Flynn doesn’t play a note unless it needs to be played.

His latest solo album, Fierce Modal, is a daring effort consisting of entirely original instrumentals. It opens with a gentle meditation he calls “End of an Era”, which gave me an image of a pool of water,  glimmering in sunlight, but seemingly standing still. Then you realize that the water is moving – not very fast, and not very far, but in a very logical way. END_OF_DOCUMENT_TOKEN_TO_BE_REPLACED

ONE IV is the newly released recording from Old New England, which is Jane Orzechowski on fiddle, Deanna Stiles on flute, piccolo and fiddle, and Bob McQuillen on piano and accordion.  As one might expect, the arrangements are fairly  straightforward, and the orchestration does not employ the rhythmical gymnastics and melodic pyrotechnics that are increasingly common with recordings of dance music. In the hands of less capable musicians that might make for tedious listening, but not only is this recording a total pleasure to listen to – I personally think it represents the best album yet from this trio.

Some of the appeal is achieved through understatement. An example of that appears in the first set. It starts with “Jack Beard’s Jig”, moves on to “Dr. Becky’s”, and then after a switch to “Martha’s Hornpipe”, I gradually realized the time signature had changed from 6/8 to 4/4. This is a common trick among contra dance musicians, but it is usually rendered with a bit of a flourish. Here it was a like a subtle but refreshing change of scenery on a drive down a winding country road. END_OF_DOCUMENT_TOKEN_TO_BE_REPLACED 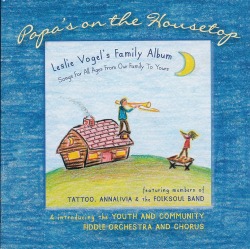 It’s not surprising that Leslie Vogel’s new CD, Papa’s On The Housetop, is a whole lot of fun. Leslie is a singer, accordion and keyboard player for the bands Tatoo and The Folksoul Band, both of whom know how to really find a groove and bask in it. Leslie is also the director of the Greenfield/Wilton (NH) based Youth and Community Fiddle Orchestra. Her daughter Liz sings with the hot Celtic band Annalivia. All of these troops are called into action for this recording, as well has her daughter Becky and sister Rosalinda, both great singers. So you can think this is something of a family affair, but don’t think for a minute that nepotism gets in the way here. On the contrary, Leslie couldn’t have done better in her choices for musicians on this recording (and she can certainly take some credit for where some of the musicians are today).

This recording is big fun to listen to – the kind of CD that would have been in demand for road trips when my kids were kids. That said, it plays just wonderfully for adult ears too – the arrangements are tight and lively, the songs are pretty and energetic, and when the album is over you just might feel that the world is a little bit better off. It’s a real spirit-booster.

Folks in the Monadnock area might think they are enjoying the CD because they know some of the players, or have heard them perform. But send this to your friends and relatives in LA or Atlanta and they’re just as likely to appreciate it.

Papa’s On The Housetop can be bought at the Toadstool Bookstores in Milford or Peterborough,  from CD Baby, or  send an email to Leslie directly to order.

Listen to a sampler: 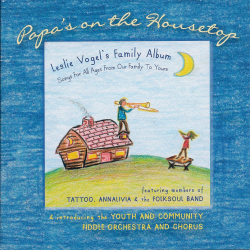 Performers include members of the bands Tattoo, Annalivia, and the Folksoul Band, the Youth and Community Fiddle Orchestra and Chorus, and Flying Gravity Circus!

Dancing from noon to midnight in the magnificent  Peterborough Town House..

The original all day contra dance

The fabulous bands, with callers, in order of appearance

Please bring a clean pair of shoes to protect the dance floor.

A portion of the proceeds will be donated to local charities. 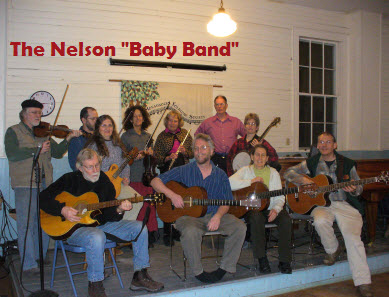 New England Fiddle and dance music genre.  But what really makes our region rich are the numbers of folk who play, largely for their own pleasure, out of sheer love for the tunes.  In any given week there are numerous gatherings, often in private homes, with fiddles, guitars, mandolins, flutes, banjos, and – well just about anything goes. Many of these gatherings are semi private – that is to say, if you know someone who goes regularly, you might get invited, but the event is not highly publicized, largely because of space considerations.

Among the more public sessions: on Monday night there is the “Baby Band”, where a dozen or so musicians of varying skill gather for an hour before the contra dance in the Nelson Town Hall. The repertoire is based on an ever-expanding photo-copied hand out, the Portland Collection, The New England Fiddler’s Repertoire, and the Waltz books. It’s a round robin affair, with each player requesting a specific tune (and sometimes introducing “new” ones). Hilliare Wilder is fixed at the piano (to provide consistent accompaniment). Lisa Sieverts “moderates” the session, making sure newcomers feel welcome, and generally keeping things on track. END_OF_DOCUMENT_TOKEN_TO_BE_REPLACED

The Rhythm Rollers are a west coast band, but with a special attachment to New England contra dance music, and  notably (pun intended) for the “piano playing of Bob McQuillen, the tunes he has written, his relentless encouragement, and his jokes.”

Their new recording, Grand Right and Left, features none other than the man himself on the ivories, Cathie Whitesides on fiddle, Laurie Andres, accordion, and WB Reid on banjo-guitar (that would be a guitar in a banjo body), regular guitar, and fiddle.

Joy Abounds! Of course it’s impossible to hear McQuillen playing the piano without cracking a smile that invokes awareness of some higher power. But two additional components stand out on this recording. Laurie’s accordion playing gets right to the point. END_OF_DOCUMENT_TOKEN_TO_BE_REPLACED

I have warm, if somewhat faded, memories of my first wading into the pool of folk music in the mid 1970s; 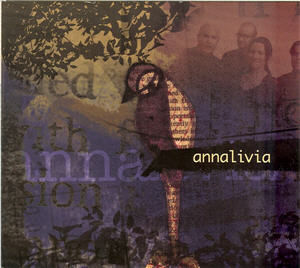 American ballads, their Scottish cousins, and of course the fiddle music: gradually learning to hear the differences between the Scottish, Irish, Cape Breton, French Canadian, and New England styles. And of course the “contemporary” songs – those attributed to a living composer. The pool became an ocean, and it comes pleasantly washing back over me now when I listen to the debut recording from Annalivia.

Titled, simply Annalivia, this album has a bit of everything, from the opening southern ballad “A Sailor Being Tired”, followed by a stately medley of newly composed fiddle tunes: Goon Castle and The Groton Session Jig, contemporary songs composed by Richard Thompson and Mark Simos, a powerful “Cape Breton Set”, and so on – a wonderful variety of styles and genres reflecting influences which include Pentangle, The Bothy Band, Anne Briggs, Fairport Convention, Altan, Jimmy Page, XTC, Steeleye Span, Bill Monroe, Jean Ritchie, Alison Krauss and Union Station, and Emmylou Harris. From such fertile ground Annalivia has build a sound that stands on its own for originality, on a foundation of stellar musicianship. END_OF_DOCUMENT_TOKEN_TO_BE_REPLACED 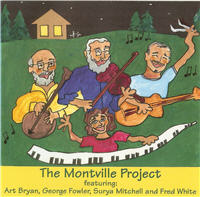 England musicians: Art Bryan, George Fowler, Surya Mitchell, and Fred White. The project grew out of a workshop which the musicians presented at the 2007 Maine Fiddle Camp inMontville, Maine, called The Essential Dance Tune Repertoire. As explained in the liner notes, “Any musical tradition has a core repertoire which experienced players are expected to know.” Attendees of the aforementioned workshop encouraged the recording of the tunes – most of them have been recorded previously and in some cases frequently, but until now there has not been a definitive collection exclusively representing the classics. “Definitive” must be qualified: originally 200 tunes were identified as candidates, but practical considerations required editing the list down to 53. Most of the tunes are presented in sets of three or four, for a total of 22 tracks, making over an hour and seven minutes of music! END_OF_DOCUMENT_TOKEN_TO_BE_REPLACED