The Nelson Music Collection was first published in 1969, as a “Collection of Authentic Square Dance Melodies. Compiled by Newt Tolman, a flute player from Nelson, and his piano accompanist, Kay Gilbert from Peterborough, it contains 64 tunes that might be heard at one of the local square dances. It became an important resource over the next decade as the face of square dancing evolved (and became more commonly known as contra dancing), and as young musicians aspired to learn the tunes so that they could play for the dances. Eventually it took a back seat to newer collections which offered additional and newly popularized tunes, but serious scholars and musicians remained aware of its existence. Newt and Kay also issued an LP recording of the same name, which featured many of the tunes from the book. It was one of the first commercial recordings of this music.

Several years ago a box of approximately 400 copies of the Nelson Music Collection tune book were discovered by Kay’s daughter Kayti. At about that time, a copy of the LP was used to create a digital master of the recording. There was talk of a reissue of both items, but it was not until recently that Newt’s son, Renn Tolman, began to move the project forward. The result is a package consisting of the original book (with the scores hand-inscribed by Kay), a CD of the remastered recording, and biography of Newt entitled New Tolman and the Haynes flute.

The tune book had been produced with a comb binding, making it possible to insert additional pages. This gave Renn the opportunity to write a new introduction. Newt’s writing (he was a regionally well-known author of many books and essays on life in rural New Hampshire) has a curmudgeonly charm one might expect from a pure Yankee character.
From Newt’s introduction: “While square dancing has continued to flourish, there has been no correspondingly widespread revival of the authentic traditional music, that we know of, comparable to what we have been doing here in Nelson, N.H. In the country at large, the only square dance music generally available – at public dances, in movies, shows, and TV, on records or printed scores – has been almost universally bad, and very often spurious.”

Renn’s pen yields a similar flavor, and he issues something of a disclaimer in his new introduction: “In the introduction to the book Newt defines tune classifications. But Newt was no scholar. Scholarship was after all boring and in those pre-Internet days research meant leaving his beloved hilltop estate, Greengate, with its non-stop social life. Thus if he didn’t know something, he was not above making it up. I’m no scholar either, but I’ll try to correct his most outrageous errors with the aid of common reference sources. “

Renn is clear that the recording is of uneven quality (it was recorded at home, without benefit of the studio magic), but the highlights are spectacular.

The package ($34.95) is available from Amazon (click here), and is also available at the Monadnock Center for History and Culture (Peterborough Historical Society), 19 Grove St. in Peterborough, during open hours (Wed – Sat, 10 – 4). 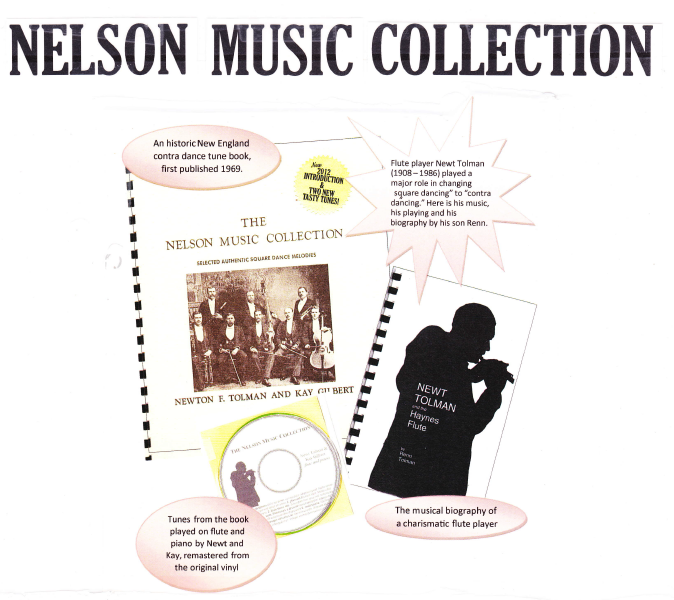