The New England Folk Festival Association in collaboration with the Center for the Humanities at the University of New Hampshire invites you to join us to celebrate our New England music and dance traditions. This weekend is named in honor of Ralph Page, who was pivotal in sustaining and reviving traditional contra and square dancing in New England.

Visit the web site for this event.

The Monadnock Folklore Society has been approved for an FY2010 New Hampshire State Council on the Arts Mini Grant to support performances at the upcoming Ralph Page Dance Legacy Weekend. 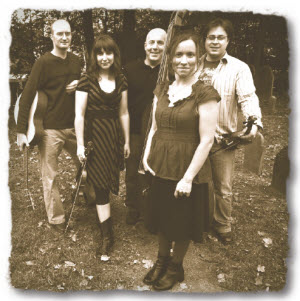 ANNALIVIA is one of latest hip alt-traditional acoustic bands to emerge form the potent Boston fiddle music scene. Their music combines Anglo-Celtic ballad singing and fiddle dance music traditions with North American counterparts in the Southern Appalachians and Cape Breton Island. Their sound is a genuine fusion of closely related musics which also draws on contemporary songwriters, in addition to contributing original instrumentals to an evolving tradition.

As I set out to write this month’s Folknotes, there is a convergence of information about 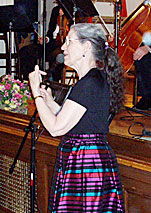 some members of the music and dance community who are bravely facing health problems. Though it is a more solemn topic than we generally address here, I hope that this will help to focus energy and prayerful thoughts in the lives of these individuals.

Marianne Taylor has been a central figure on the New England contra dance scene for decades. Her recent struggle with cancer has not diminished her spirits, but she is no longer able to be active. Her dear friend Sylvia Miskoe has written the following words about her:

I first met Marianne in 1955 at a dance workshop in Exeter, NH. I don’t remember if it was Scottish Country Dance or square/contra. She was 24, married to Conny Taylor (Cornell), and pregnant with their first child. A beautiful dancer, a confident woman, just the perfect role model for me, a college junior. END_OF_DOCUMENT_TOKEN_TO_BE_REPLACED

After 11 albums the soulful baritone voice of John Gorka continues to turn heads. Lauded by Rolling Stone as the “preeminent male singer-songwriter of the New Folk Movement, Gorka performs rich multi-faceted songs full of depth, beauty and emotion that have grabbed the attention of critics and audiences across the country and Europe. His latest release, Writing in the Margins, is an engaging collection of sweet and serious songs that spans many musical genres-folk, pop, country and soul. With stories about love, war and the hope for a better world, John has released his most compelling and accessible album to date.

The release of Beautiful World (May 2008), the fresh masterpiece from Grammy-nominated songwriter Eliza Gilkyson, is her first studio album since her award-winning 2005 release of Paradise Hotel. The New York Times has lauded her latest effort as “lush and passionate…edgy lyrics with piercing imagery.” Dirty Linen has called Gilkyson “one of the most influential artists on the American folk music scene.” Her new album is a collection of songs that explore optimism and love for the world despite its violence and darkness. In support of this record, Eliza will tour North America and Europe. This is her first appearance in Peterborough.

Veteran of 7 albums, the latest being The High Above and Down Below, Cliff Eberhardt remains of the most respected songwriters on the club scene. His is known for his great melodies and clever lyrical twists. Cliff’s musical career has spanned nearly his entire life, starting when he knew at age seven that he was going to be a singer-songwriter and his dad introduced him to the guitar. He’s been on the club scene since the 1970’s and has played with many well-known folk legends. His songs have been recorded by Dar Williams, Richie Havens, Shawn Colvin and many others.

with special guest Avi and Celia

It’s the annual New Years Eve potluck and dance at the Nelson Town Hall, taking place on Friday, December 31st. We’ll begin with a dinner potluck at 7 PM, and then continue with contra dancing until it’s time for fireworks at the pond.

It’s the 10th annual Christmas Night dance at the Nelson Town Hall. Amy Cann and Bob McQuillen will provide tunes with the normal Nelson variety of callers. Festivities begin at 8:00 pm. There will be a dessert potluck afterwards so bring treats. Admission is free — the Monadnock Folklore Society sponsors this dance as a gift to the community.

Once upon a time, in the town of Nelson, a wonderful tradition was born.

Ten years ago or so, the callers and dancers at a Monday Nite Contra Dance
realized that Christmas was going to fall on a Monday that year.  Imagine
the dilemma!  Nelson has always held a public contra dance on Monday nights.
If they were to skip Christmas, then the world record would end.  Not
wishing to jeopardize the record, and wishing to see good friends and family
again, the tradition began!

It’s a Christmas night dance.  It starts at the usual 8pm time.  This year
Bob McQuillen will be on piano, Amy Cann will be on fiddle with plenty of
guest musicians and callers.  It’s always a good night!

One year we had three feet of snow.  But Bob McQuillen drove up for the
dance, Don Primrose showed up to call and there was a family visiting from
New York that wanted to dance on Christmas Day.  We couldn’t get into the
hall because of the snow, so we moved the furniture from our living room and
Bob played his accordion.  That night was my favorite of all the Christmas
dances.”

This story about one of Nelson’s traditions was submitted by Val Van Meier.